The Hon. Gerald Neston, the on of Lord Tottlebuiy, agrees with his noble father, that the dignity of the title as well as his own comfort, make a rich marriage incumbent upon him. So he seeks out Mr. Witt’s widow, a lady of great wealth and no family, and is accepted by her. But at the dinner given in honor of the lady by Lord Tottlebury, a young lawyer, who belongs also to the house of Neston, recognizes in Mrs. Witte the young thief who had been his first “case.”

The fascinations of Mr. Witt’s widow are “harmonious contrasts.” chief among which are dark eyes and golden hair. She is about to take as second husband Gerald Neston, an Englishman of good position, when his cousin, a young lawyer. Is struck with the resemblance of Neaera Witt to Nelly Gale, a girl he had defended seven years before on a charge of theft. The story relates his efforts to trace her identity, and leaves the reader’s mind in suspense until the unexpected denouement. 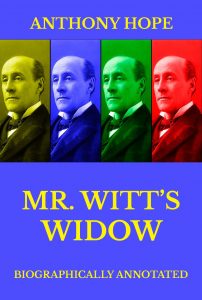