Father Stafford is veritably a tragic tale, albeit it appears that he has seen ﬁt to give it more the setting of a comi-tragedy. But when the heart of a noble, maguanimous character, like that of Father Stafford, is involved in a serious love affair, with no future but that of blighted hopes and disappointment, one feels like looking upon such scenes with a solemn, thoughtful mien , yet one must smile occasionally, for Anthony Hope has the knack of applying the most sparkling and humorous of dialogues exactly at the right moment, thus saving his dramatic and tragical scenes from going utterly to pieces. However, this is Anthony Hope over and over again. We recognized him as the prince of dialogue in “ The Prisoner of Zenda,” and although the story of “ Father Stafford ” is of entirely different aspect, the “ speaking parts” are just as delicious. Father Stafford is an Anglican clergyman, and a man of remarkable talents, yet his inclinations would probably have been better directed had he turned them toward affairs of the world. As it is, a good, well-meaning man, who has bound himself to prayers, self-abnegation, and the Church, also taking the vow of celibacy, discovers too late that the ﬂesh of mankind is weak, and that love is king of all emotions. His life is one of peacefulness until he meets Lady Claudia Territon at the English houseparty where the story is cast, when life for the “ pope,” as she charmingly dubs him, begins to drift into other spheres, different from the altitude of the religious devotee, and extremely unfortunate for the young minister, whose duty it is to walk in the ways of the righteous … 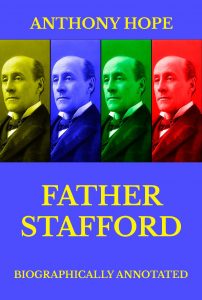