A Child’s Life Of Christ

This book is merely the story of the life and death of our Lord. It has been written for those who have not the leisure, or the books, needed for threading together the fragmentary and scattered incidents recorded in the Four Gospels. These records have been searched diligently for the smallest links, which might serve to complete the chain of those years passed amongst us by One who called himself the Son of man, and did not refuse to be called the Son of God. The great mystery that surrounds Christ is left untouched. Neither love nor thought of ours can reach the heart of it, whilst still we see him as through a glass darkly. When we behold him as he is, face to face, then, and only then, shall we know fully what he was, and what he did for us. Whilst we strain our eyes to catch the mysterious vision, but dimly visible, we are in danger of becoming blind to that human, simple, homely life, spent amongst us as the pattern of our days. Happy they who are content with being known of God. 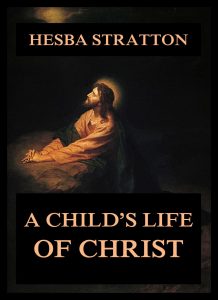 A Child’s Life Of Christ

A Child’s Life Of Christ.

‘Heba Stretton’ was the pen name of Sarah Smith, one of the most popular Evangelical writers of the 19th century, who used her “Christian principles as a protest against specific social evils in her children’s books.” Her moral tales and semi-religious stories, chiefly for the young, were printed in huge numbers and often chosen as school and Sunday-school prizes. She became a regular contributor to Household Words and All the Year Round under Charles Dickens’s editorship, after her sister had successfully submitted a story of hers without her knowledge. Altogether she wrote more than 40 novels.

The book that won widespread fame for “Hesbah Stretton” was Jessica’s First Prayer, first published in the journal Sunday at Home in 1866 and the following year in book form. By the end of the 19th century it had sold at least a million and a half copies. Critic Brian Alderson notes that its sales were “nearly ten times as many as those of Alice in Wonderland.” The book gave rise to a genre of stories about homeless children “that successfully combined elements of the sensational novel and the religious tract and helped introduce the image of the poor, urban child into the Victorian social conscious.” It has been published in the United States as part of the Lamplighter Family Collection, under the title Jessica’s Journey.

A sequel, Jessica’s Mother, was published in Sunday at Home in 1866 and as a book in 1904. Jessica is a homeless girl in Victorian London, abandoned by an alcoholic actress mother, but who finds comfort and religious support in a friendship with Daniel Standring, owner of a coffee stall. She appears as a child actress, but when she becomes too big for such parts, she is beaten by her mother, receives little to eat, and wanders about London. The act of humanity by Standring, a chapel keeper in a Methodist chapel, helps him too, by re-evaluating his concept of religion and respectability.

Smith became the chief writer for the Religious Tract Society. Her experience of working with slum children in Manchester in the 1860s gave her books a greater sense of authenticity, for they “drive home the abject state of the poor with almost brutal force.”