A Lady of Quality

A Lady of Quality – Frances Hodgson-Burnett

The period of the tale is the reign of Queen Anne, and it is written in the language of the period—an audacious undertaking when one remembers that such a style must invite comparison with that of ” Henry Esmond.” Mrs. Burnett has written the story of a girl whose mother died in giving her birth, and who has grown to young womanhood under no softer influence than that of her father, who is a swaggering, sporting, hard-drinking squire of those easy-going days. So slight is his interest in domestic affairs that he doesn’t know his own daughter—as she plays about the hall, at six years of age, with the young children of the servants—until she is pointed out to him. The child’s ingrained audacity strikes her father’s fancy, and he declares she shall be reared as a boy, and allowed to do as she likes. Thenceforward she dresses in boy’s clothes, and has for companions only such rough friends as her father gathers about him … 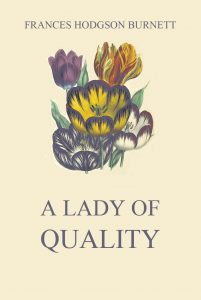 A Lady of Quality

A Lady of Quality.