Little Saint Elizabeth (and other stories)

This volume contains four stories, different in kind, but alike in the grace and spirit of their handling. The pretty tale from which the book borrows its name has for heroine a little French girl brought up in an old chateau in Normandy by an aunt who is recluse and denote. Little Saint Elizabeth is educated very much as her great namesake may have been, in a round of religious observances varied by acts of charity,and is trained to meditate much on the state of her soul and the woes of other people. Her head is filled with legends of saints and martyrs, her heart with zeal to emulate their good examples, and also with deep and tender pity, a real hunger after helpfulness for all human suffering. A child of this type transplanted suddenly while still in childhood to the realistic atmosphere of prosperous New York, must inevitably have much to suffer. She is puzzled ; she is lonely; she has no one to direct her conscience. The quaint little figure blindly trying to guess the riddle of duty under these unfamiliar conditions is pathetic, and Mrs. Burnett touches it in with delicate strokes. We are all glad when at last she finds a friend, and when Uncle Bertrand learns to recognize and allow for the spiritual need which is the mainspring of her nature. 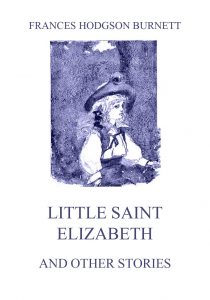 Little Saint Elizabeth (and other stories)

Little Saint Elizabeth (and other stories).