The One I Knew The Best Of All

The One I Knew The Best Of All – Frances Hodgson-Burnett

To say that Mrs. Burnett’s account of ‘The One I Knew Best of All’ is a fascinating book, is to put the matter very mildly. It is not one little girl alone whose experiences are here recorded, but, as the author justly claims, it is the story of any child with an imagination. Mrs. Burnett’s recollections go back to a very early age; she remembers events that happened before she was three years old, and she cannot remember a time when she was not capable of forming decided opinions about things. Mrs. Burnett has written many attractive books—books that have made friends for her all over the world—but she has never written a book more charming than this. The naiveté, candor, and utter unpretentiousness of it are qualities that give it an enduring fascination. 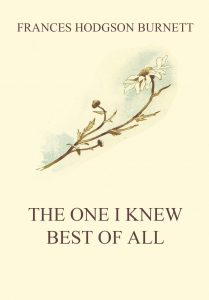 The One I Knew The Best Of All

The One I Knew The Best Of All.