In Connection with De Willoughby Claim

The novel consists of two plots or movements. Apparently wholly disconnected, but always, as the logic of events carries them on, bending nearer and nearer, until the principal dramatis personae meet in Washington, the keystone is slipped into place, and lo, the two are one! Mrs. Burnett possesses consummate constructive skill. When this keystone crowns the arch we see that every character and every event has contributed to the symmetry of the whole. Every part has been wrought and fitted with the artist’s instinct for perfection. But analogies cannot be pushed too far, and the similitude of the arch may give a false impression of the two lines along which the story moves. They are, in their nature, wholly unlike. The one, from an opening doubly tragic, passes into the sweetest of idyls; the other from the fairest beginning into the darkest of tragedies. 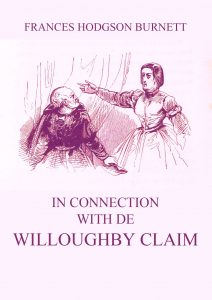 In Connection with De Willoughby Claim

In Connection with De Willoughby Claim.