A Ride in Egypt

Mr. Loftie’s very pleasant book relates, strictly speaking, to an excursion from Sioot to Luxor, undertaken by the author and three friends in 1879, but it includes as well some entertaining notes en route from England to the East, and a number of instructive chapters on Cairo and its environs. The “Ride” proper, which was taken mostly on donkey-back, conducted the party a little aside from the hackneyed track, and to some of the less well known points of archaeological interest, notably to the ruins of This, or Thinis, claimed by modern Egyptologists as the cradle of ancient monarchy. Nothing fresher or more entertaining on the subject of Egypt has appeared for a long time back than this well-considered volume. Mr. Loftie gives us much that is curious as well as entertaining with regard to antiquities, history, and the humors of the road; and makes a little gentle fun of the school, headed by Mr. Piazzi Smith, which professes to have discovered so much of the secret of the great Pyramid; and he deserves special credit for his forcible and manly exposure of the misdoings and misgovernment of the Khedive, who was at that time still the shielded pet of English stockholders, and of the terrible results of his mal-administration as evidenced by the Fellah famine. 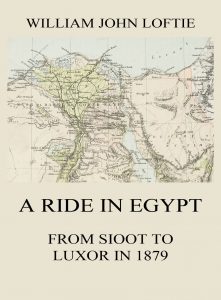 A Ride in Egypt

A Ride in Egypt.