De Guerville, the author of “New Egypt,” is able to break through the hedges that surround the divinely-appointed affairs of many foreign places. In his own words he obtained his intormation about the new Egypt from “ highly placed personages in the Egyptian world, English, French, natives, and others; these men, keen and talented, who in palaces, ministries, legations, schools, hospitals, bands, or large industrial concerns, are working without ceasing for the regeneration of Egypt.” Not for a long time has there been a book of travel that is so very interesting and refreshingly instructive. The author took the trip from Alexandria to Cairo, thence to Luxor, Karnac, Assouan, Khartoum, and Fashoda – now called Kodok. His account of these places is interspersed with facts relative to the French in Egypt, the pleasures of Cairo, Ismail and his reign, the commercial and industrial life of the land, and the social, religious, and political conditions in this rapidly changing country 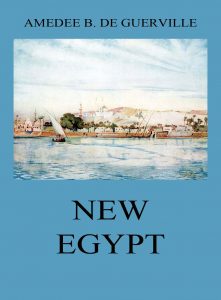