No one ever understood the mythology and Ritual of Ancient Egypt so well as Gerald Massey since the time of the Ancient Philosophers of Egypt. This book is one of the best when it comes down to Egyptian mythology, occultism and interpretation. It’s a standard work no one wants to miss. This is volume one out of two. 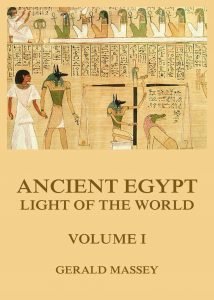 Basics on the ancient Egyptian deities (from wikipedia.com)

Ancient Egyptian deities are the gods and goddesses worshipped in ancient Egypt. The beliefs and rituals surrounding these gods formed the core of ancient Egyptian religion, which emerged sometime in prehistory. Deities represented natural forces and phenomena, and the Egyptians supported and appeased them through offerings and rituals so that these forces would continue to function according to maat, or divine order. After the founding of the Egyptian state around 3100 BC, the authority to perform these tasks was controlled by the pharaoh, who claimed to be the gods’ representative and managed the temples where the rituals were carried out.

The gods’ complex characteristics were expressed in myths and in intricate relationships between deities: family ties, loose groups and hierarchies, and combinations of separate gods into one. Deities’ diverse appearances in art—as animals, humans, objects, and combinations of different forms—also alluded, through symbolism, to their essential features.

In different eras, various gods were said to hold the highest position in divine society, including the solar deity Ra, the mysterious god Amun, and the mother goddess Isis. The highest deity was usually credited with the creation of the world and often connected with the life-giving power of the sun. Some scholars have argued, based in part on Egyptian writings, that the Egyptians came to recognize a single divine power that lay behind all things and was present in all the other deities. Yet they never abandoned their original polytheistic view of the world, except possibly during the era of Atenism in the 14th century BC, when official religion focused exclusively on the impersonal sun god Aten.

Gods were assumed to be present throughout the world, capable of influencing natural events and the course of human lives. People interacted with them in temples and unofficial shrines, for personal reasons as well as for larger goals of state rites. Egyptians prayed for divine help, used rituals to compel deities to act, and called upon them for advice. Humans’ relations with their gods were a fundamental part of Egyptian society.