Confessions of an Inquiring Spirit

Never was there a book less entitled than the “Confessions of an Inquiring Spirit” to the honour of effecting a revolution in theology, or becoming the manifesto of any school of inquirers accustomed to habits of sound and accurate reasoning. With not a little to remind us of the reach and originality of thought which distinguish the other writings of Coleridge, it is marked to a most vicious excess with looseness and inaccuracy of conception; it betrays a painful ignorance of the main facts and fundamental principles involved in the question at issue; and, by the confident, but impotent attempt which he makes to marry a mystical philosophy to an unsound theology, he only shows that he has strayed into a province of speculation with whose guiding landmarks he was completely unacquainted. Nor is this failure to grasp, and inability to deal with, the necessary conditions of the problem to be solved, so conspicuous in Coleridge’s discussion of the doctrine of inspiration, altogether due to his limited and defective preparation for dealing with the subject; it is in no small measure to be attributed to the exigencies of his position and argument. 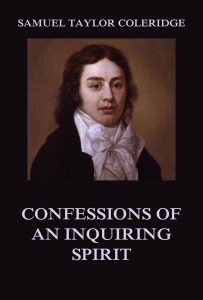 Confessions of an Inquiring Spirit

Confessions of an Inquiring Spirit.

Samuel Taylor Coleridge was an English poet, literary critic, philosopher and theologian who, with his friend William Wordsworth, was a founder of the Romantic Movement in England and a member of the Lake Poets. He wrote the poems The Rime of the Ancient Mariner and Kubla Khan, as well as the major prose work Biographia Literaria. His critical work, especially on William Shakespeare, was highly influential, and he helped introduce German idealist philosophy to English-speaking culture. Coleridge coined many familiar words and phrases, including suspension of disbelief. He had a major influence on Ralph Waldo Emerson and on American transcendentalism.

Throughout his adult life Coleridge had crippling bouts of anxiety and depression; it has been speculated that he had bipolar disorder, which had not been defined during his lifetime. He was physically unhealthy, which may have stemmed from a bout of rheumatic fever and other childhood illnesses. He was treated for these conditions with laudanum, which fostered a lifelong opium addiction.