Nicholas Barbon was an English economist, physician, and financial speculator. He is widely conceived as one of the first proponents of the free market. This edition includes his most prominent essays: 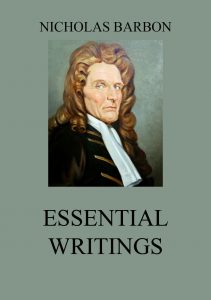 Biography of Nicholas Barbon (from Wikipedia):

Nicholas Barbon was the eldest son of Praise-God Barebone (or Barbon), after whom the Barebone’s Parliament of 1653—the predecessor of Oliver Cromwell’s Protectorate—was named. Praise-God’s reputed Christian name was “Unless-Jesus-Christ-Had-Died-For-Thee-Thou-Hadst-Been-Damned”, a variant of his son’s middle name. He became a religious separatist with Millenarianist beliefs, with fervent views in favour of infant baptism in particular.

Nicholas was born in London in either 1637 or 1640. He studied medicine at the Universities of Leiden and Utrecht in the Netherlands, and received his Doctor of Medicine qualification from the latter in 1661. Three years later, he became an honorary fellow of the Royal College of Physicians in London.

He soon turned from the medical profession to the building trade, which suddenly became important in 1666 when the Great Fire of London devastated the City of London—the commercial district of London which at the time was still separate from Westminster, the seat of Britain’s government. Within a few years he was “the most prominent London builder of his age”. He worked on a large scale—building swathes of housing and commercial developments to the west of the City of London, where land was plentiful—and was ultimately responsible for connecting the City and Westminster for the first time as a result of his work in the districts which became The Strand and Bloomsbury. Barbon did this despite long-established restrictions on new buildings associated with various Acts of Parliament and royal declarations in the late 16th century: he often simply disregarded legal and local objections, demolished existing buildings without permission and rebuilt speculatively in search of a quick profit.

On 11 June 1684, Barbon’s continued aggressive expansionary speculation brought him and his workers into conflict with lawyers based at Gray’s Inn. Barbon started his largest project yet, the redevelopment of Red Lion Square, without being authorised to do so. The Gray’s Inn lawyers, whose Inns of Court were adjacent, started and won a physical battle with Barbon and his colleagues, and arranged for warrants to be issued against him to stop the scheme proceeding. Another setback came when cheaply built houses at Mincing Lane collapsed because their foundations were inadequate. Nevertheless, by the time of his death, Barbon had built or financed developments to the value of £200,000 (£23.6 million as of 2017) according to Sir John Lowther, 1st Viscount Lonsdale.

At the same time, Barbon took an interest in the development of insurance and the banking industry, and helped to pioneer both. In 1680–81, with 11 associates, he founded an “Insurance Office for Houses” which offered fire insurance for up to 5,000 households in London. Fires were a major danger in London at the time: the Great Fire destroyed more than 13,000 houses and displaced about 100,000 people, and another conflagration in 1678 damaged the Middle Temple, one of the Inns of Court. In 1690, together with John Asgill, he founded the National Land Bank. This was Britain’s first land bank—a financial institution which issued loans in the form of mortgages against real estate. These were popular with landowners because they could now raise money against the value of their main asset. The bank was moderately successful, and even threatened to usurp the Bank of England in 1696. The government budget deficit had grown to an unsustainable level; Barbon merged the National Land Bank with another institution (founded by John Briscoe) to form Land Bank United, and offered the government a £2 million loan (£250 million as of 2017). The scheme foundered when Barbon and Briscoe could not raise enough money, and Land Bank United was demerged.

Barbon was also active in other fields during the 1690s. He was MP for Bramber in Sussex in 1690 and 1695, which allowed him to take advantage of Parliamentary privilege (immunity from prosecution)—this helped him evade various court actions which were pending against him. Another project involved trying to pump drinking water from the River Thames, to be piped to his new building developments. He patented a design in 1694, and tried to sell pumping rights alongside fire insurance contracts. He built a house for himself and his business interests in Fleet Street, but later moved to Osterley House, a 16th-century manor house west of London. He died there in 1698 or 1699: his will was written in May 1698 and his executors received probate on 6 February 1699.