On the Law of War and Peace – Hugo Grotius

“On The Law of War and Peace” was translated into many languages, and most law schools adopted it as the basis of the right of nations. Princes and statesmen consulted the book, and just as Alexander the Great always had a copy of Homer’s ‘Iliad,’ so the great Gustavus Adolphus always had with him a copy of Grotius’ work, to remind himself that even the most successful general must respect some laws. Grotius’ strength lies in his moderation and in the fact that he quotes copiously from the best authorities to fortify his views . 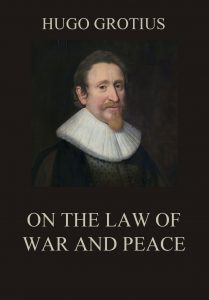 Biography of Hugo Grotius (from Wikipedia):

Hugo Grotius (10 April 1583 – 28 August 1645), also known as Huig de Groot or Hugo de Groot, was a Dutch jurist. Along with the earlier works of Francisco de Vitoria and Alberico Gentili, Grotius laid the foundations for international law, based on natural law. A teenage intellectual prodigy, he was imprisoned for his involvement in the intra-Calvinist disputes of the Dutch Republic, but escaped hidden in a chest of books. He wrote most of his major works in exile in France.

It is thought that Hugo Grotius was not the first to formulate the international society doctrine, but he was one of the first to define expressly the idea of one society of states, governed not by force or warfare but by actual laws and mutual agreement to enforce those laws. As Hedley Bull declared in 1990: “The idea of international society which Grotius propounded was given concrete expression in the Peace of Westphalia, and Grotius may be considered the intellectual father of this first general peace settlement of modern times.”

Additionally, his contributions to Arminian theology provided the seeds for later Arminian-based movements, such as Methodism and Pentecostalism and he is acknowledged as a significant figure in the Arminianism-Calvinism debate. Because of his theological underpinning of free trade, he is also considered an “economic theologist”.