Mr. Gilbert Chesterton is quite on his own ground in writing essays about about Heretics. Such subjects as Kipling, Shaw, Whistler, H. G. Wells, the new paganism, and the importance of orthodoxy possess brilliancy enough in themselves to satisfy even this arch-priest of brilliancy in style. 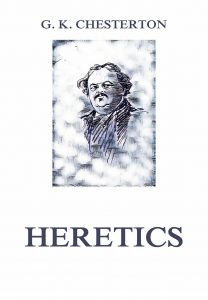