Justin Martyr was a Christian apologist, born at Flavia Neapolis, about A.D. 100, who converted to Christianity about A.D. 130, taught and defended the Christian religion in Asia Minor and at Rome and he suffered martyrdom about the year 165. Among other writings this volume contains: The First Apology of Justin, The Second Apology of Justin, Dialogue of Justin, Justin’s Hortatory Address to the Greeks, The Martyrdom of the Holy Martyrs … 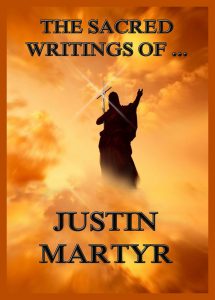 The Sacred Writings of Justin Martyr.

Saint Justin, also known as Justin Martyr (Greek: Ιουστίνος ο Μάρτυρας, Latin: Iustinus Martyr) was an early Christian apologist, and is regarded as the foremost interpreter of the theory of the Logos in the 2nd century. He was martyred, alongside some of his students, and is considered a saint by the Roman Catholic Church, the Anglican Church, the Eastern Orthodox Church, and the Oriental Orthodox Churches.

Most of his works are lost, but two apologies and a dialogue did survive. The First Apology, his most well known text, passionately defends the morality of the Christian life, and provides various ethical and philosophical arguments to convince the Roman emperor, Antoninus, to abandon the persecution of the fledgling sect. Further, he also indicates, as St Augustine did regarding the “true religion” that predated Christianity, that the “seeds of Christianity” (manifestations of the Logos acting in history) actually predated Christ’s incarnation. This notion allows him to claim many historical Greek philosophers (including Socrates and Plato), in whose works he was well studied, as unknowing Christians.