This book is one of the best and most comprehensive about Hermetic philosophy and a perfect textbook for your first steps into alchemy. Being a real suggestive inquiry into the Hermetic mystery, this work consists of four parts:

I. An Exoteric View of the Progress
and Theory of Alchemy
II. A More Esoteric Consideration
of the Hermetic Art & Its Mysteries
III. Concerning the Laws and Vital
Conditions of the Hermetic Experiment
IV. The Hermetic Practice 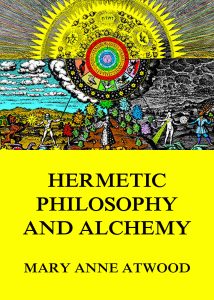 The Basics of Hermeticism (from wikipedia.com)

Hermeticism, also called Hermetism, is a religious, philosophical, and esoteric tradition based primarily upon writings attributed to Hermes Trismegistus (“Thrice Great”). These writings have greatly influenced the Western esoteric tradition and were considered to be of great importance during both the Renaissance and the Reformation. The tradition claims descent from a prisca theologia, a doctrine that affirms the existence of a single, true theology that is present in all religions and that was given by God to man in antiquity.

Many writers, including Lactantius, Cyprian of Carthage, Augustine, Marsilio Ficino, Giovanni Pico della Mirandola, Giordano Bruno, Campanella, Sir Thomas Browne, and Ralph Waldo Emerson, considered Hermes Trismegistus to be a wise pagan prophet who foresaw the coming of Christianity. St. Thomas Aquinas reported that Trismegistus arrived at something akin to the doctrine of the Trinity.

Much of the importance of Hermeticism arises from its connection with the development of science during the time from 1300 to 1600 AD. The prominence that it gave to the idea of influencing or controlling nature led many scientists to look to magic and its allied arts (e.g., alchemy, astrology) which, it was thought, could put Nature to the test by means of experiments. Consequently, it was the practical aspects of Hermetic writings that attracted the attention of scientists.

Isaac Newton placed great faith in the concept of an unadulterated, pure, ancient doctrine, which he studied vigorously to aid his understanding of the physical world. Many of Newton’s manuscripts—most of which are still unpublished—detail his thorough study of the Corpus Hermeticum, writings said to have been transmitted from ancient times, in which the secrets and techniques of influencing the stars and the forces of nature were revealed, i.e. As Above, So Below.