Homing with the Birds

Homing with the Birds – Gene Stratton-Porter

“Homing with the Birds” is a book in which one comes into intimate contact with one’s feathered friends, to the extent of feeling that they actually have personalities! This is doubtless because Mrs. Porter is a true and devoted friend to them herself, and has been so since her childhood. She says: “Almost my first distinct memory is connected with a bird.” and then proceeds to tell how this was upon an occasion when she was willing to deny herself the joy of eating cherries in order that woodpeckers in the neighborhood might not be killed! Many such incidents of the author’s childhood are in the book, demonstrating her intense, almost romantic, attachment to the feathered tribes. The book is more than a record of bird life, it is that of a charming young, growing human life deeply concerned with the things of nature. At the same time it is full of information not only delightful but useful for birdlovers and students of natural history and outdoor matters. 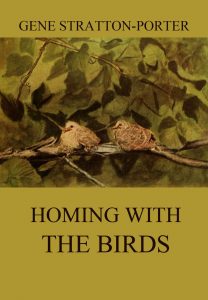 Homing with the Birds

Homing with the Birds.