Moths of the Limberlost

Moths of the Limberlost – Gene Stratton-Porter

It is about this very bit of Indiana that Mrs. Porter has written her book,”Moths of the Limberlost,” and it is the most unusual and interesting nature book ever imagined. It is a story of the “Moths” of the Limberlost which every reader of “A Girl of the Limberlost” will remember. Mrs. Porter pictures and describes the moth, hunted by Elnora, and in these chapters there is one oi the landscapes over which she hunted, much of the swamp, and the very bridge under which she was working to cut loose a cocoon when Philip came up the stream, fishing. There is also the log cabin in which Elnora lived. The text is just scientific enough to give the name and description of each moth, cocoon and caterpillar; the remainder is a fascinating record of personal experiences in finding or raising the specimens. 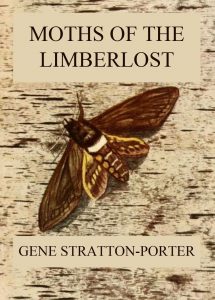 Moths of the Limberlost

Moths of the Limberlost.