In “Ideal Commonwealths” Professor Henry Morley offers a selection of the most known writings on this topic, as well as his own reflections. Included are Plutarch’s Lycurgus, More’s Utopia, Bacon’s New Atlantis, Campanella’s City of the sun and a fragment of Hall’s Mundus alter et ide. 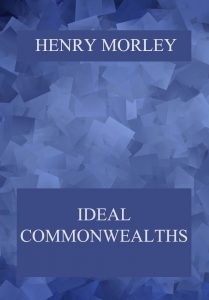 Biography of Henry Morley (from Wikipedia):

The son of apothecary Henry Morley, the younger Morley was born in Hatton Garden, London. He was educated at a Moravian Church school in Neuwied, Germany and entered King’s College London 1838. Morley graduated in 1843 and became part of the Worshipful Society of Apothecaries, a professional organization, that same year.

Marley bought into an apothecary practice in Madeley, Shropshire, but it turned into a financial failure. In 1848, he established a school in Manchester and started writing in his spare time. Morley wrote some satirical articles that were published and gained the attention of Charles Dickens.

At Dickens’ invitation, Morley moved to London in 1850 to become an editor of and a contributor to Dickens’ publication, Household Words. When that publication dissolved, Morley worked for its successor, All the Year Round. From 1859 to 1864, Morley also edited and wrote for The Examiner.

From 1865 to 1889, Morley served as professor of English literature at University College London, his students including the Indian writer Rabindranath Tagore. Noted for his knowledge of English literature, Morley was considered to be an engaging and warm teacher. He also delivered popular lectures on literature in different parts of Great Britain.

From 1882 to 1889, Morley was principal of University Hall, a research library in Bloomsbury, London.