The Wisdom of the Ancients

The Wisdom of the Ancients – Sir Francis Bacon

Bacon published this interesting little work in 1609. It contains thirty-one fables abounding with a union of deep thought and poetic beauty. In most fables he explains the common but erroneous supposition that knowledge and the conformity of the will, knowing and acting, are convertible terms. 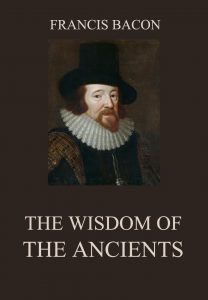 The Wisdom of the Ancients

The Wisdom of the Ancients.