Not perhaps since Henry James gave us the inimitable “Daisy Miller” has modern fiction presented the character of a woman so sensitive, so innately innocent in her faults and weaknesses, so inevitably tragic in her fate, as the heroine of this book, Margaret Capel. The story develops in this fashion: A talented woman writer, who is ill and under the influence of morphia, goes to a nursing home where a gifted girl has lived and died. For a year she lives in this home attended by the same physician who had treated the girl. In the “twilight” world, under the influence of drugs, she sees the phantom of the girl, and with the aid of a packet of letters and the confession of the physician, reconstructs the strange, tragic romance of Margaret Capel and her lover, Gabriel Stanton. 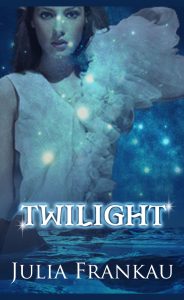 Biography of Julia Frankau (from Wikipedia):

Frankau’s father was Hyman Davis (1824–1875), a London portrait photographer, though she and her older siblings were born in Dublin, where Davis practised as a dentist during the 1850s. On returning to London in the early 1860s, the Davis family lived first in Bruton Street before moving to Maida Vale.

She was a sister of the librettist Owen Hall (1853–1907) and the gossip columnist and fashion writer Mrs Aria (1861–1931). For a brief period during her early teens, she was home-tutored by Laura Lafargue, a daughter of Karl Marx. Another of her brothers, Harrie Davis, emigrated to New York, where he was employed as manager of the Gettysburg Cyclorama and also went on to pursue a journalistic career.

She married the London cigar importer Arthur Frankau (1849–1904) in 1883. They lived first at 103 Gloucester Terrace (London W), moving to 32a Weymouth Street in the later 1880s. Two of their three sons were author Gilbert Frankau (1884–1952) and actor Ronald Frankau (1894–1951) (thus Julia Frankau is grandmother of novelist Pamela Frankau and actress Rosemary Frankau, and great-grandmother of bibliographer Timothy d’Arch Smith and scriptwriter Sam Bain), and their daughter was the Cambridge don Joan Bennett (1896–1986), one of the “constellation of critics” called by the defence in the Lady Chatterley Trial. In this connection, it is interesting to note that Julia herself was credited by Mrs Belloc Lowndes with having been “one of the very few to recognise the genius of D. H. Lawrence”.

Julia’s sister Florette married architect Marcus E. Collins in 1889, thus connecting the Davis and Frankau families with Arthur Collins of Drury Lane Theatre, theatrical manager Horace Collins, and stage director Frank Collins. Florette Collins published one novel in 1906, whereupon her sisters suggested she should content herself with being “the beauty of the family”. The actor Henry Irving joined Arthur and Julia Frankau’s family circle after Mrs Aria became his mistress in the 1890s.

During the 1890s, Julia Frankau began to research and write on engraving, ultimately publishing (under her own married name) three books on the subject. Her sister Eliza recalled: “having started a small collection of eighteenth-century engravings of mezzotint and stipple, she particularly favoured the English stipple colour prints, and because no book existed telling her what she wanted to know about them, she set to work and wrote one.” After she returned to fiction – or, to use her own phrase, “relapsed into novel writing” – in 1902, The Sketch found “something quaint in the thought that Mrs Frankau – who, as ‘Frank Danby’, has recently published that brilliant study of contemporary manners (and morals), Pigs in Clover – should be, as she is without question, the greatest living authority on that daintiest product of the eighteenth century, the colour-print.”

The commercial success of Pigs in Clover, which coincided with a substantial inheritance from Arthur’s late brother and business partner Edwin Frankau (1854–1903), permitted Arthur and Julia Frankau to move from Weymouth Street to 11 Clarges Street, as well as acquiring a seaside retreat named Clover Cottage (now 13 South Cliff, Eastbourne). Their Clarges Street house was said to have been occupied at one time by Emma, Lady Hamilton, thus providing inspiration for Frank Danby’s Story of Emma, Lady Hamilton.