The period of “Ivanhoe” is a few months subsequent to “The Talisman.” Richard I has abandoned his Crusade, and, after an incarceration in an Austrian prison returns to his English throne to find plots against him headed by his brother John, and also a general state of unrest. Normans and Saxons still quarrel, and the story as a whole gives an admirable picture of feudal times. Ivanhoe is the only son of Cedric the Saxon, and has been disinherited by his father on account of his love for Cedric’s ward, the Lady Rowena. lie thereupon goes with King Richard to Palestine and wins renown in the Crusade. He returns to England disguised as a Palmer. Meanwhile his father maintains the ancient Saxon state at his manor of Rotherwood, at odds with the Norman “interlopers.” Cedric therefore accords but grudging hospitality to a Norman knight, Sir Brian de Bois-Guilbert, when the latter seeks shelter from a storm, being guided thereto by a pilgrim. During the evening repast, Lady Rowena inquires news of the Crusade and is informed that Ivanhoe has gained fame and the favor of the King. Bois-Guilbert thereupon boasts that he himself would like to meet him at a pending tournament; at which the pilgrim takes up the gage forthe knight … 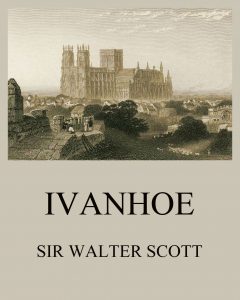 The Novelism of Sir Walter Scott (from Wikipedia):

Although Scott had attained worldwide celebrity through his poetry, he soon tried his hand at documenting his researches into the oral tradition of the Scottish Borders in prose fiction—stories and novels—at the time still considered aesthetically inferior to poetry (above all to such classical genres as the epic or poetic tragedy) as a mimetic vehicle for portraying historical events. In an innovative and astute action, he wrote and published his first novel, Waverley, anonymously in 1814. It was a tale of the Jacobite rising of 1745. Its English protagonist, Edward Waverley, like Don Quixote a great reader of romances, has been brought up by his Tory uncle, who is sympathetic to Jacobitism, although Edward’s own father is a Whig. The youthful Waverley obtains a commission in the Whig army and is posted in Dundee. On leave, he meets his uncle’s friend, the Jacobite Baron Bradwardine and is attracted to the Baron’s daughter Rose. On a visit to the Highlands, Edward overstays his leave and is arrested and charged with desertion but is rescued by the Highland chieftain Fergus MacIvor and his mesmerizing sister Flora, whose devotion to the Stuart cause, “as it exceeded her brother’s in fanaticism, excelled it also in purity”. Through Flora, Waverley meets Bonnie Prince Charlie, and under her influence goes over to the Jacobite side and takes part in the Battle of Prestonpans. He escapes retribution, however, after saving the life of a Whig colonel during the battle. Waverley (whose surname reflects his divided loyalties) eventually decides to lead a peaceful life of establishment respectability under the House of Hanover rather than live as a proscribed rebel. He chooses to marry the beautiful Rose Bradwardine, rather than cast his lot with the sublime Flora MacIvor, who, after the failure of the ’45 rising, retires to a French convent.

There followed a succession of novels over the next five years, each with a Scottish historical setting. Mindful of his reputation as a poet, Scott maintained the anonymity he had begun with Waverley, publishing the novels under the name “Author of Waverley” or as “Tales of…” with no author. Among those familiar with his poetry, his identity became an open secret, but Scott persisted in maintaining the façade, perhaps because he thought his old-fashioned father would disapprove of his engaging in such a trivial pursuit as novel writing. During this time Scott became known by the nickname “The Wizard of the North”. In 1815 he was given the honour of dining with George, Prince Regent, who wanted to meet the “Author of Waverley”.

Scott’s 1819 series Tales of my Landlord is sometimes considered a subset of the Waverley novels and was intended to illustrate aspects of Scottish regional life. Among the best known is The Bride of Lammermoor, a fictionalized version of an actual incident in the history of the Dalrymple family that took place in the Lammermuir Hills in 1669. In the novel, Lucie Ashton and the nobly born but now dispossessed and impoverished Edgar Ravenswood exchange vows. But the Ravenswoods and the wealthy Ashtons, who now own the former Ravenswood lands, are enemies, and Lucie’s mother forces her daughter to break her engagement to Edgar and marry the wealthy Sir Arthur Bucklaw. Lucie falls into a depression and on their wedding night stabs the bridegroom, succumbs to insanity, and dies. In 1821, French Romantic painter Eugène Delacroix painted a portrait depicting himself as the melancholy, disinherited Edgar Ravenswood. The prolonged, climactic coloratura mad scene for Lucia in Donizetti’s 1835 bel canto opera Lucia di Lammermoor is based on what in the novel were just a few bland sentences.

Tales of my Landlord includes the now highly regarded novel Old Mortality, set in 1679–89 against the backdrop of the ferocious anti-Covenanting campaign of the Tory Graham of Claverhouse, subsequently made Viscount Dundee (called “Bluidy Clavers” by his opponents but later dubbed “Bonnie Dundee” by Scott). The Covenanters were presbyterians who had supported the Restoration of Charles II on promises of a Presbyterian settlement, but he had instead reintroduced Episcopalian church government with draconian penalties for Presbyterian worship. This led to the destitution of around 270 ministers who had refused to take an oath of allegiance and submit themselves to bishops, and who continued to conduct worship among a remnant of their flock in caves and other remote country spots. The relentless persecution of these conventicles and attempts to break them up by military force had led to open revolt. The story is told from the point of view of Henry Morton, a moderate Presbyterian, who is unwittingly drawn into the conflict and barely escapes summary execution. In writing Old Mortality Scott drew upon the knowledge he had acquired from his researches into ballads on the subject for The Minstrelsy of the Scottish Border. Scott’s background as a lawyer also informed his perspective, for at the time of the novel, which takes place before the Act of Union of 1707, English law did not apply in Scotland, and afterwards Scotland has continued to have its own Scots law as a hybrid legal system. A recent critic, who is a legal as well as a literary scholar, argues that Old Mortality not only reflects the dispute between Stuart’s absolute monarchy and the jurisdiction of the courts, but also invokes a foundational moment in British sovereignty, namely, the Habeas Corpus Act (also known as the Great Writ), passed by the English Parliament in 1679. Oblique reference to the origin of Habeas corpus underlies Scott’s next novel, Ivanhoe, set during the era of the creation of the Magna Carta, which political conservatives like Walter Scott and Edmund Burke regarded as rooted in immemorial British custom and precedent.

Ivanhoe (1819), set in 12th-century England, marked a move away from Scott’s focus on the local history of Scotland. Based partly on Hume’s History of England and the ballad cycle of Robin Hood, Ivanhoe was quickly translated into many languages and inspired countless imitations and theatrical adaptations. Ivanhoe depicts the cruel tyranny of the Norman overlords (Norman Yoke) over the impoverished Saxon populace of England, with two of the main characters, Rowena and Locksley (Robin Hood), representing the dispossessed Saxon aristocracy. When the protagonists are captured and imprisoned by a Norman baron, Scott interrupts the story to exclaim:

It is grievous to think that those valiant barons, to whose stand against the crown the liberties of England were indebted for their existence, should themselves have been such dreadful oppressors, and capable of excesses contrary not only to the laws of England, but to those of nature and humanity. But, alas …fiction itself can hardly reach the dark reality of the horrors of the period. (Chapter 24.33)
The institution of the Magna Carta, which happens outside the time frame of the story, is portrayed as a progressive (incremental) reform, but also as a step towards the recovery of a lost golden age of liberty endemic to England and the English system. Scott puts a derisive prophecy in the mouth of the jester Wamba:

Norman saw on English oak.
On English neck a Norman yoke;
Norman spoon to English dish,
And England ruled as Normans wish;
Blithe world in England never will be more,
Till England’s rid of all the four. (Ivanhoe, Ch. xxvii)
Although on the surface an entertaining escapist romance, alert contemporary readers would have quickly recognised the political subtext of Ivanhoe, which appeared immediately after the English Parliament, fearful of French-style revolution in the aftermath of Waterloo, had passed the Habeas Corpus Suspension acts of 1817 and 1818 and other extremely repressive measures, and when traditional English Charter rights versus revolutionary human rights was a topic of discussion.

Ivanhoe was also remarkable in its sympathetic portrayal of Jewish characters: Rebecca, considered by many critics the book’s real heroine, does not in the end get to marry Ivanhoe, whom she loves, but Scott allows her to remain faithful to her own religion, rather than having her convert to Christianity. Likewise, her father, Isaac of York, a Jewish moneylender, is shown as a victim rather than a villain. In Ivanhoe, which is one of Scott’s Waverley novels, religious and sectarian fanatics are the villains, while the eponymous hero is a bystander who must weigh the evidence and decide where to take a stand. Scott’s positive portrayal of Judaism, which reflects his humanity and concern for religious toleration, also coincided with a contemporary movement for the Emancipation of the Jews in England.