Kilmeny of the Orchard

The secluded old apple orchard in which Eric Marshall, a young Canadian, finds the beautiful, though dumb,Kilmeny, is on Prince Edward Island. Eric is the son of a wealthy man and had come to a small village on the island to teach school for a month as asubstitute for a sick friend. In one of his rambles he comes upon the old orchard, and hearing strains of music is tempted to investigate. He finds Kilmeny alone playing a violin. At sight of him the girl rushes away. The young man, however, is fascinated by her beauty and loses no time in finding out how he can make her acquaintance. 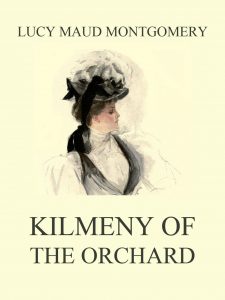 Kilmeny of the Orchard

Kilmeny of the Orchard.

The characters in Kilmeny of the Orchard (from Wikipedia):

Eric Marshall: The male protagonist in the story. He is described as “one of those men regarding whom less-favoured mortals are tempted to wonder why all the gifts of fortune should be showered on one individual”.[1] His one fault seems to be extreme pragmatism. Eric lost his mother when he was ten, and has high ideals regarding a future wife.

Kilmeny Gordon: Kilmeny is the main female protagonist, a sheltered, beautiful girl. Unfortunately, Kilmeny is mute, and expresses herself with the help of a slate and pencil, or her treasured violin.

David Baker: Eric’s older friend who owes David’s father a debt of gratitude. He works as a throat specialist. David is very close to Eric and wishes he would get married.

Larry West: A poor, hardworking student who used to go to school with Eric. He offers Eric a position as a teacher at a school in Lindsay, on PEI.

Thomas Gordon: Kilmeny’s uncle, who helped raise her after her mother’s death three years back. He is well-read, and wins any argument he enters, although he becomes embarrassed for days after.

Janet Gordon: Kilmeny’s aunt, who helped raise her after her mother’s death three years back. An intelligent woman. she stays in the woman’s sphere, but enjoys seeing her brother bested.

Margaret Gordon: Kilmeny’s dead mother, whose stubbornness and influence last past the grave.

Neil Gordon: An Italian who was orphaned as a baby, Neil spent his life as an outsider. He was raised by the Gordons, and loves Kilmeny.