The Chronicles of Avonlea

Miss Montgomery continues to follow up the vein she opened in “Anne of Green Gables.” These stories are all of Spencervale or Avonlea. Anne herself —or what we hope to be a caricature of her—appears on the cover, and is mentioned now and again within. But she is not the leading figure in any of the tales, which might have been called “Romances of Middle Age,” so strongly does a single motive dominate them. Ten out of the dozen stories deal with belated love-affairs, or with the pathetic devotion of age for youth. 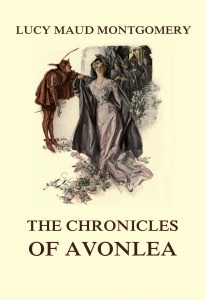 The Chronicles of Avonlea

The Chronicles of Avonlea.

The stories included in the Chronicles of Avonlea (from Wikipedia):
“The Hurrying of Ludovic”: Anne Shirley is behind Ludovic Speed’s proposal to Theodora Dix after their very long courtship.
“Old Lady Lloyd”:Old Lady Lloyd, thought to be very rich, encounters the daughter of her former beau and tries to help her.
“Each in His Own Tongue”: Reverend Stephen Leonard attempts to stifle his son Felix’s gifted violin-playing, which he sees as unholy.
“Little Joscelyn”: Aunty Nan hears of Joscelyn Burnett’s return to Prince Edward Island and greatly desires to hear her old friend sing.
“The Winning of Lucinda”: Lucinda and Romney Penhallow’s longtime feud is resolved.
“Old Man Shaw’s Girl”: Mrs Peter Blewett attempts to destroy Old Man Shaw’s hopes regarding the return of his beloved daughter Sara (“Blossom”).
“Aunt Olivia’s Beau”: Olivia Sterling is courted by Malcolm McPherson.
“Quarantine at Alexander Abraham’s”: Severe man-hater Angelina “Peter” MacPherson is quarantined for smallpox with Alexander Abraham Bennett, a misogynist who has not allowed a woman in his house for years.
“Pa Sloane’s Purchase”: Pa Sloane rashly buys a baby at an auction and must deal with the consequences.
“The Courting of Prissy Strong”: Stephen Clark courts Prissy Strong despite her sister Emmeline’s strong opposition.
“The Miracle at Carmody”: Avowed atheist Judith Marsh and her sister Salome attempt to raise young Lionel Hezekiah.
“The End of a Quarrel”: Peter Wright and Nancy Rogerson meet again, many years after a quarrel over his grammar broke them up.