The Further Chronicles of Avonlea

From the author of “Anne of Green Gables”, of whom Mark Twain said: “She is the dearest and most moving and delightfut child since the immortal Alice.” These new stories of Avonlea, the home of the immortal heroine of Anne of Green Gables, are written with the same wonderful understanding of human nature that the author has shown in her previous work, and have repeated the success of the famous “Anne” books. 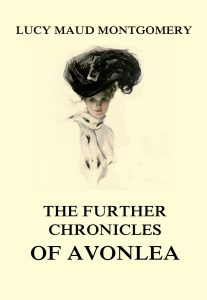 The Further Chronicles of Avonlea

The Further Chronicles of Avonlea.

The stories included in the Further Chronicles of Avonlea (from Wikipedia):
“Aunt Cynthia’s Persian Cat”: Aunt Cynthia leaves her beloved Persian cat Fatima in the care of her unwilling nieces Sue and Ismay Meade. When Fatima disappears, Sue must call on desperate measures to avoid wealthy Aunt Cynthia’s wrath.
“The Materializing of Cecil”: Unwilling to admit that she has never had a suitor, Miss Charlotte Holmes invents the dashing Cecil Fenwick of Blakely, New Brunswick to keep the Avonlea gossips at bay. When the real Cecil appears, Miss Charlotte fears the truth will emerge. (This story formed the basis for an episode in the popular Canadian television series Road to Avonlea, substituting Marilla Cuthbert for Miss Charlotte.)
“Her Father’s Daughter”: Rachel Spencer invites her estranged father to her wedding, to the fury of hermother Isabella.
“Jane’s Baby”: When Jane Roberts dies, her cousins Miss Rosetta Ellis and Mrs. Charlotte Wheeler feud over her child.
“The Dream-Child”: A mysterious wailing calls grieving mother Josie to the seaside; she believes it is the cry of the ghost of her and David’s first baby.
“The Brother Who Failed”: During the Monroes’ reunion at the family home in Avonlea, Aunt Isabel tactlessly remarks that Robert is “the only failure,” and his siblings initiate a scheme to restore his self-esteem.
“The Return of Hester”: Dying Hester Meredith forces her sister Margaret to promise she won’t marry Hugh Blair, but when Margaret and Hugh fall desperately in love, Hester herself intervenes.
“The Little Brown Book of Miss Emily”: Anne Shirley and her friend Diana Barry become acquainted with irritating old maid Miss Emily Leith while they’re staying at Echo Lodge in Grafton; upon Miss Emily’s death, Anne receives a mysterious parcel. Narrated by Anne Shirley.
“Sara’s Way”: Mrs. Eben Andrews discusses her daughter Sara and Sara’s suitor Lige Baxter with Mrs. Jonas Andrews. When Lige’s brother’s business is ruined, everyone involved has a different view of the situation.
“The Son of his Mother”: Thyra Carewe learns that her beloved son Chester has bestowed his affections on the beautiful Damaris Garland.
“The Education of Betty”: Newly-widowed Sara Churchill arranges for a former beau to tutor her untamed daughter Betty.
“In Her Selfless Mood”: Eunice Carr devotes her life to granting her mother Naomi Holland’s deathbed request that she look after Christopher Holland, Naomi’s son and Eunice’s half-brother.
“The Conscience Case of David Bell”: David Bell refuses to testify in the name of Jesus Christ, to the horror of Avonlea society.
“Only a Common Fellow”: Story of the Mark Foster/Phillippa Clark/Owen Blair love triangle.
“Tannis of the Flats”: Jerome Carey, telegraph officer in “The Flats,” a trading station in the Canadian Northwest, becomes the object of beautiful “half-breed” Tannis Dumont’s affections, but he falls in love with Elinor Blair of Avonlea.