With “March Hares” Mr. Frederic has written an original, witty, and delightful story. Mr. David Mosscrop is a young and erudite Scot, given to an indulgence in too much drink. One morning, in a melancholy and repentant mood, he is lounging on Westminster Bridge, when a young woman, with lemon-colored hair, comes by. Since they are both frequenters of the reading-room in the British Museum, they have some knowledge of each other. Together they walk away to breakfast. Love takes its usual eccentric gait, but in the end there is the noise of wedding bells. 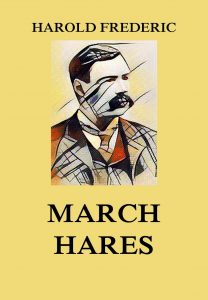