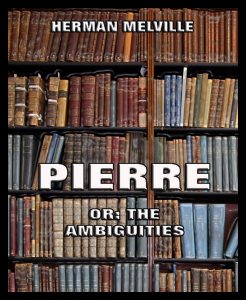 Pierre Glendinning, junior, is the 19-year-old heir to the manor at Saddle Meadows in upstate New York. Pierre is engaged to the blonde Lucy Tartan in a match approved by his domineering mother, who controls the estate since the death of his father, Pierre, senior. When he encounters, however, the dark and mysterious Isabel Banford, he hears from her the claim that she is his half-sister, the illegitimate and orphaned child of his father and a European refugee. Pierre reacts to the story (and to his magnetic attraction for Isabel) by devising a remarkable scheme to preserve his father’s name, spare his mother’s grief, and give Isabel her proper share of the estate.

He announces to his mother that he is married; she promptly throws him out of the house. He and Isabel then depart for New York City, accompanied by a disgraced young woman, Delly Ulver. During their stagecoach journey, Pierre finds and reads a fragment of a treatise on “Chronometricals and Horologicals” on the differences between absolute and relative virtue by one Plotinus Plinlimmon. In the city, Pierre counts on the hospitality of his friend and cousin Glendinning Stanley, but is surprised when Glen refuses to recognize him. The trio (Pierre, Isabel, and Delly) find rooms in a former church converted to apartments, the Church of the Apostles, now populated by impecunious artists, writers, spiritualists, and philosophers, including the mysterious Plinlimmon. Pierre attempts to earn money by writing a book, encouraged by his juvenile successes as a writer.

He learns that his mother has died and has left the Saddle Meadows estate to Glen Stanley, who is now engaged to marry Lucy Tartan. Suddenly, however, Lucy shows up at the Apostles, determined to share Pierre’s life and lot, despite his apparent marriage to Isabel. Pierre and the three women live there together as best they can, while their scant money runs out. Pierre’s writing does not go well — having been “Timonized” by his experiences, the darker truths he has come to recognize cannot be reconciled with the light and innocent literature the market seeks. Unable to write, he has a vision in a trance of an earth-bound stone giant Enceladus and his assault on the heavenly Mount of Titans. Beset by debts, by fears of the threats of Glen Stanley and Lucy’s brother, by the rejection of his book by its contracted publishers, by fears of his own incestuous passion for Isabel, and finally by doubts of the truth of Isabel’s story, Pierre guns down Glen Stanley at rush hour on Broadway, and is taken to jail in The Tombs. There Isabel and Lucy visit him, and Lucy dies of shock when Isabel addresses Pierre as her brother. Pierre then seizes upon the secret poison vial that Isabel carries and drinks it, and Isabel finishes the remainder, leaving three corpses as the novel ends.