After his kingdom of Ruritania had been invaded by a score or more of imitators, Mr. Anthony Hope came back to England to sing of a man sans arms, whose victories are as remarkable, if not so renowned, as those of Rudolph Rassendyll. Alexander Quisante becomes a power in the house of commons and a ruler in that realm of finance known in London as “the city,” all by the grace of a ready tongue, an adjustable conscience, and the stupidity of his fellow men. His equipment for a hero is very meager. In the first place he was “not quite a gentleman,” not merely in the English acceptance of that term, but even in our more democratic diction. The fact that nothing was known of his antecedents beyond the rumor that his father had grown wine in Spain might be overlooked, but not the defects in his manners and morals. On public occasions and in regard to public audiences he possessed a tact and a power of understanding the feelings of his company which entirely and conspicuously failed him in private life. He was ill-bred, but he was not mean; he was a vaunter, but not a coward; he demanded adherence and did not beg alms. This was the attitude of his mind, so strongly contradicted by the cringing of his body and the wheedling of his tongue … 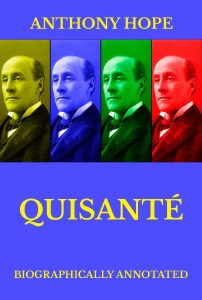