Here is a rattling good story. Mr. Hope has often furnished us with tales answering that description before, but they were performances of a different order. Whereas his previous successes have been stories of incident, this is a novel of character. The vein of Zenda can easily be worked out, but the success of “Tristram of Blent” can be repeated indefinitely to a satisfied audience. It is the kind of story Anthony Trollope might write if he were abridged, reincarnated, brought up to date, and given a touch of the divine fire to vivify the carefully shaped clay of his puppets. Both in plot and workmanship the story is much better than any of Mr. Hope’s former attempts in the same line. It seems to mark his achievement of mastery in this kind, and holds out the promise of an indefinite number of clever novels of social life to accompany the present generation on its way down the shady side of life. 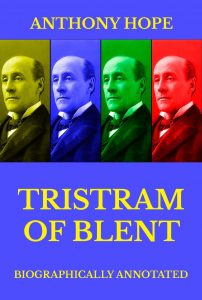