The Intrusions of Peggy

The Intrusions of Peggy – Anthony Hope

Anthony Hope has written two kinds of stories; one interesting for the civilized detail, the other for the situation and plot. When we read the first kind we do not care about the result, and we don’t get excited. If we have plenty of leisure and care for little turns of expression, feeling, and thought, and care a great deal for clean and pleasant society, we are content with books like “The Dolly Dialogues.” The mixture of tolerance, urbanity, and cynicism is just right for the idle person of refinement who does not want to do anything very difficult; even to feeling and thinking. The other kind of book vein that Mr. Hope has done well is the romantic story of adventure: as ” The Prisoner of Zenda,” where we are hurried along by a string of exciting impossibilities. “The Intrusions of Peggy” is a mixture of these two manners. It has the Hope quality in the details—the indirect, civilized suggestiveness, the lightness, the touch of the mere stylist. One could make pertinent quotations ad infinitum. It has the other element, too, like intrigue and some excitement. 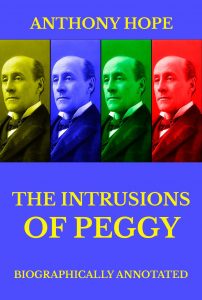 The Intrusions of Peggy

The Intrusions of Peggy.