The subject of this book is the form of Yoga known as Raja-Yoga. The aphorisms of Patanjali are the highest authority on Raja-Yoga, and form its textbook. The other philosophers, though occasionally differing from Patanjali in some philosophical points, have, as a rule, acceded to his method of practice a decided consent. The first part of this book comprises several lectures to classes delivered by the writer in New York. The second part is a rather free translation of the aphorisms (Sutras) of Patanjali, with a running commentary. 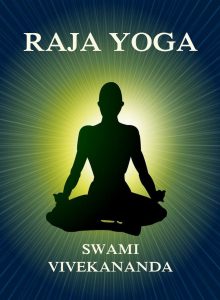 Contents and idea of the book (from Wikipedia):

Raja Yoga contains transcripts of lectures by Vivekananda on “Raja Yoga”, his interpretation of Patanjali’s Yoga sutras, and a “rather free translation” of Patanjali’s Yoga Sutras plus Vivekananda’s commentaries, which also was a series of talks. It presents Vivekananda’s understanding and interpretation of Patanjali’s Yoga Sutras, “and a selection of hathayoga teachings on the basis of the beliefs that he shared with his students.” These included elements from traditional Hinduism, but also ideas from western science, Idealism, and “the Neo-Vedantic esotericism of the Brahmo Samaj and Western occultism,” including mesmerism and “American Harmonial religion.”

Vivekananda adapted traditional Hindu ideas and religiosity to suit the needs and understandings of his western audiences, who were especially attracted by and familiar with western esoteric traditions and movements like Transcendentalism and New thought. An important element in his adaptation of Hindu religiosity was the introduction of his four yoga’s model, which includes Raja yoga, his interpretation of Patanjali’s Yoga sutras, which offered a practical means to realize the divine force within which is central to modern western esotericism. The other three yogas are the classical Karma Yoga (Karma Yoga), Bhakti Yoga, and Jnana Yoga (Jnana Yoga).

Vivekananda’s interpretation of Patanjali’s Yoga Sutras is mostly based on the part on astanga yoga, the eight limbs of yoga described in the Sadhana Pada or practice part. According to De Michelis, Vivekananda’s ideas on Raja Yoga mainly consists of two different models, with sometimes a third “mode of thought”:

The Prana Model, which is mostly applied in the first part, is strongly influenced by the mesmeric beliefs which were popular at that time, and also contains Hatha-yoga teachings. It gives a prominent place to prana as the central life force, which can be controlled by Raja Yoga. The accumulation of prana leads to liberation, and furthers “speed[s] up the adepts on their evolutionary path towards the ultimate goal.”
The Samadhi Model, which focuses on the power of mind, and is strongly influenced by Transcendentalism, New Thought, and William James’ Functional psychology. Yoga is presented here as a journey of the mind back to its origins by means of meditative practice. According to Vivekananda, “each individual mind is part of the “universal mind”” which can be rejoined by attaining samadhi.
A third mode of thought, called “Neo-Advaitic” by De Michelis, is otherworldly oriented. It insists on leaving behind “all powers and attainments,” to reach an “altogether transcendent state.” This state is reached in the last stage of samadhi, and is equal to the identification with the purusa, or “the One or Emerson’s Oversoul c.q. Absolute.