Tess Of The D’Urbervilles

Tess Of The D’Urbervilles – Thomas Hardy

This book has made Mr. Hardy one of the most prominent English novelist. The power and the movement of the story are so great that it is only when we read a review of it that we are conscious that its author had any purpose save that which is common to every true writer of fiction—viz.: to tell a story which shall please. But this unconsciousness of a novelist’s purpose is the highest tribute that can be paid to his work. Tess, the milkmaid heroine, has fallen from virtue through no fault of her own. Subsequently her great passion for a second and nobler lover sweeps her into a marriage with him after she has failed to tell him of her condition, although she has attempted to do so. Her confession of her secret to her husband is one of the most powerful and painful scenes in all literature. After the weak man has deserted her, she undergoes in patience a life of unspeakable torture, but at last falls again to her former betrayer in order to keep her mother and her family from starvation. Her husband returns to her, and in her remorse she stabs her betrayer to death. After a brief period of ecstatic bliss with the now repentant man, whose desertion has brought her to such a pass, she is seized by the officers of the law and led to the scaffold…. 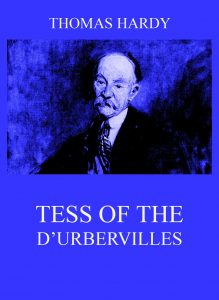 Tess Of The D’Urbervilles

Tess Of The D’Urbervilles.