The Ritual of Transcendental Magic

This work is in two parts: in the first one, called “The Doctrine of Transcendental Magic”, we establish the kabalistic and magical doctrine in its entirety; this here, the second part, is consecrated to the cultus, that is, to Ceremonial Magic. The one is that which the ancient sages termed the Clavicle, the other that which people on the country-side still call the Grimoire. The numbers and subjects of the chapters which correspond in both parts, are in no sense arbitrary, and are all indicated in the great universal key, of which we give for the first time a complete and adequate explanation. Let this work now go its way where it will and become what Providence determines; it is finished, and we believe it to be enduring, because it is strong, like all that is reasonable and conscientious. 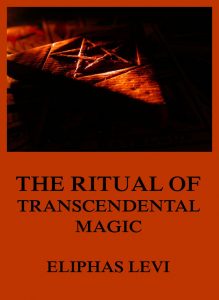 The Ritual of Transcendental Magic

The Ritual of Transcendental Magic.

Levi’s definition of magic (from wikipedia.com)

This section needs additional citations for verification. Please help improve this article by adding citations to reliable sources. Unsourced material may be challenged and removed. (December 2014) (Learn how and when to remove this template message)
Lévi’s works are filled with various definitions for “Magic” and the “Magician”:

“He looks on the wicked as invalids whom one must pity and cure; the world, with its errors and vices, is to him God’s hospital, and he wishes to serve in it.”
“They are without fears and without desires, dominated by no falsehood, sharing no error, loving without illusion, suffering without impatience, reposing in the quietude of eternal thought… a Magus cannot be ignorant, for magic implies superiority, mastership, majority, and majority signifies emancipation by knowledge. The Magus welcomes pleasure, accepts wealth, deserves honour, but is never the slave of one of them; he knows how to be poor, to abstain, and to suffer; he endures oblivion willingly because he is lord of his own happiness, and expects or fears nothing from the caprice of fortune. He can love without being beloved; he can create imperishable treasures, and exalt himself above the level of honours or the prizes of the lottery. He possesses that which he seeks, namely, profound peace. He regrets nothing which must end, but remembers with satisfaction that he has met with good in all. His hope is a certitude, for he knows that good is eternal and evil transitory. He enjoys solitude, but does not fly the society of man; he is a child with children, joyous with the young, staid with the old, patient with the foolish, happy with the wise. He smiles with all who smile, and mourns with all who weep; applauding strength, he is yet indulgent to weakness; offending no one, he has himself no need to pardon, for he never thinks himself offended; he pities those who misconceive him, and seeks an opportunity to serve them; by the force of kindness only does he avenge himself on the ungrateful…”
“Judge not; speak hardly at all; love and act.”