The Advancement of Learning

The Advancement of Learning is a splendid attempt to defend and magnify the pursuit of learning and then to survey the existing state of human knowledge. Part of the argument of the first part has lost its cogency, or even its relevancy, today. But in breadth of view and fertility of suggestion the work is extraordinary. As a statement of intellectual ideals, and a program, or even a prophecy, of their accomplishment, it stands among the most significant productions of the Renaissance 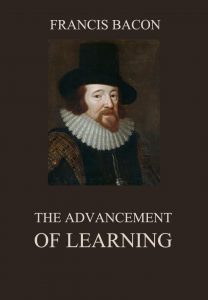 The Advancement of Learning

The Advancement of Learning.