The Book Of Isaiah

The Book Of Isaiah – James Hastings 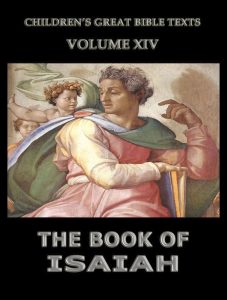 The Book Of Isaiah

The Book Of Isaiah.

He was born in Huntly, Aberdeenshire, the second son and fifth child of local miller James Hastings. His initial education was undertaken at Huntly School and Aberdeen Grammar School. He studied classics at the University of Aberdeen, graduating with a Master’s degree in 1876. He then attended the Free Church Divinity College in Aberdeen in preparation for ordination as a Free Church minister. While studying at the college, he also worked as a teacher at Chanonry House School, a private school for boys in Old Aberdeen.

Following a period as assistant minister in Broughty Ferry, Dundee, Hastings was ordained in 1884, becoming minister at Kineff Free Church in Kincardineshire. After 13 years, he was called to Willison Church in Dundee, but returned to Kincardineshire in 1901, having struggled with his city placement. From 1901 until his retirement in 1911, he was the minister at the United Free Church in St Cyrus. During his period in office, he oversaw the erection of a new church building for the congregation.

In one obituary, his preaching was described as “evangelical in sentiment, thoughtful and expository in style, fluent in delivery, and fervent in application.”

He received honorary Doctor of Divinity degrees from the University of Aberdeen (1897) and Queen’s University in Nova Scotia (1920).

After his retirement, Hastings returned to Aberdeen, where he became a member of Beechgrove United Free Church. He died unexpectedly on 15 October 1922, survived by his wife and children. His funeral was held on 18 October, and he was buried at Springbank Cemetery in Aberdeen.