The Declaration of Independence

In this long essay Becker analyzed the structure, drafting, and philosophy of the Declaration. He recognizes that it was not intended as an objective historical statement of the causes of the Revolution, but merely furnished a moral and legal justification for rebellion. Step by step, the colonists modified their theory to suit their needs.
Whenever men become sufficiently dissatisfied with the existing regime of positive law and custom, they will be found reaching out beyond it for the rational basis of what they conceive ought to be. This is what the Americans did in their controversy with Great Britain. 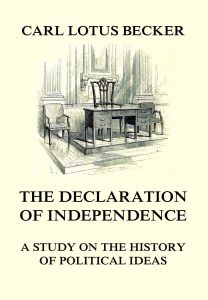 The Declaration of Independence

The Declaration of Independence.

Basics on the Declaration of Independence (from Wikipedia):

The Declaration of Independence is the statement adopted by the Second Continental Congress meeting at the Pennsylvania State House (Independence Hall) in Philadelphia on July 4, 1776, which announced that the thirteen American colonies, then at war with the Kingdom of Great Britain, regarded themselves as thirteen newly independent sovereign states, and no longer under British rule. Instead they formed a new nation—the United States of America. John Adams was a leader in pushing for independence, which was passed on July 2 with no opposing vote cast. A committee of five had already drafted the formal declaration, to be ready when Congress voted on independence. The term “Declaration of Independence” is not used in the document itself.

John Adams persuaded the committee to select Thomas Jefferson to compose the original draft of the document, which Congress would edit to produce the final version. The Declaration was ultimately a formal explanation of why Congress had voted on July 2 to declare independence from Great Britain, more than a year after the outbreak of the American Revolutionary War. The next day, John Adams wrote to his wife Abigail: “The Second Day of July 1776, will be the most memorable Epocha, in the History of America.” But Independence Day is actually celebrated on July 4, the date that the Declaration of Independence was approved.

After ratifying the text on July 4, Congress issued the Declaration of Independence in several forms. It was initially published as the printed Dunlap broadside that was widely distributed and read to the public. The source copy used for this printing has been lost, and may have been a copy in Thomas Jefferson’s hand. Jefferson’s original draft, complete with changes made by John Adams and Benjamin Franklin, and Jefferson’s notes of changes made by Congress, are preserved at the Library of Congress. The best known version of the Declaration, a signed copy that is popularly regarded as the official document, is displayed at the National Archives in Washington, D.C. This engrossed copy was ordered by Congress on July 19, and signed primarily on August 2.

The sources and interpretation of the Declaration have been the subject of much scholarly inquiry. The Declaration justified the independence of the United States by listing colonial grievances against King George III, and by asserting certain natural and legal rights, including a right of revolution. Having served its original purpose in announcing independence, references to the text of the Declaration were few in the following years. Abraham Lincoln made it the centerpiece of his rhetoric (as in the Gettysburg Address of 1863), and his policies. Since then, it has become a well-known statement on human rights, particularly its second sentence:

We hold these truths to be self-evident, that all men are created equal, that they are endowed by their Creator with certain unalienable Rights, that among these are Life, Liberty and the pursuit of Happiness.

This has been called “one of the best-known sentences in the English language”,containing “the most potent and consequential words in American history”. The passage came to represent a moral standard to which the United States should strive. This view was notably promoted by Abraham Lincoln, who considered the Declaration to be the foundation of his political philosophy, and argued that the Declaration is a statement of principles through which the United States Constitution should be interpreted.

The United States Declaration of Independence inspired many other similar documents in other countries, with its ideas gaining adherence in the Low Countries, as well as in the Caribbean, Spanish America, the Balkans, West Africa, and Central Europe in the decades up to 1848.