The Tale of Beowulf

The Tale of Beowulf – Beowulf

Beowulf could well be the oldest surviving long poem in Old English and simultaneously one of the most important works of Old English literature. The action is set in Scandinavia, where Beowulf comes to the aid of Hrothgar, the king of the Danes, who is under attack by a monster known as Grendel. Beowulf conquers Grendel and finally also his mother.Later he also defeats a dragon, but is fatally wounded in the battle. 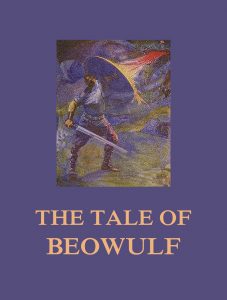 The Tale of Beowulf

The Tale of Beowulf.

Summary of Beowulf (from Wikipedia):

The protagonist Beowulf, a hero of the Geats, comes to the aid of Hrothgar, king of the Danes, whose great hall, Heorot, is plagued by the monster Grendel. Beowulf kills Grendel with his bare hands and Grendel’s mother with a giant’s sword that he found in her lair.

Later in his life, Beowulf becomes king of the Geats, and finds his realm terrorized by a dragon, some of whose treasure had been stolen from his hoard in a burial mound. He attacks the dragon with the help of his thegns or servants, but they do not succeed. Beowulf decides to follow the dragon to its lair at Earnanæs, but only his young Swedish relative Wiglaf, whose name means “remnant of valour”, dares to join him. Beowulf finally slays the dragon, but is mortally wounded in the struggle. He is cremated and a burial mound by the sea is erected in his honor.

Beowulf is considered an epic poem in that the main character is a hero who travels great distances to prove his strength at impossible odds against supernatural demons and beasts. The poem also begins in medias res or simply, “in the middle of things,” which is a characteristic of the epics of antiquity. Although the poem begins with Beowulf’s arrival, Grendel’s attacks have been an ongoing event. An elaborate history of characters and their lineages is spoken of, as well as their interactions with each other, debts owed and repaid, and deeds of valour. The warriors form a kind of brotherhood linked by loyalty to their lord.