The Gospel of Buddha

The Gospel of Buddha – Paul Carus

The best evidence that this book characterizes the spirit of Buddhism correctly can be found in the welcome it has received throughout the entire Buddhist world. It has even been officially introduced in Buddhist schools and temples of Japan and Ceylon. The eminent feature of the work is its grasp of the difficult subject and the clear enunciation of the doctrine of the most puzzling problem of tman, as taught in Buddhism. So far as we have examined the question of tman ourselves from the works of the Southern canon, the view taken by Dr. Paul Carus is accurate, and we venture to think that it is not opposed to the doctrine of Northern Buddhism. 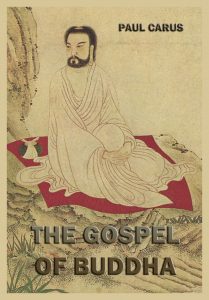 The Gospel of Buddha

The Gospel of Buddha.

About the Gospel of Buddha (from wikipedia.com)

The Gospel of Buddha was an 1894 book by Paul Carus. It was modeled on the New Testament and told the story of Buddha through parables. It was an important tool in introducing Buddhism to the west and is used as a teaching tool by some Asian sects.

Carus believed that the modern world required a new Religion of Science. By the 1890s, inspired by the meetings and conversations at the Parliament of the World’s Religions in 1893, he had decided that Buddhism was the closest faith to his ideal and created The Gospel of Buddha to popularize the religion in the West.

The work was assembled from existing English translations of Buddhists texts, with significant amendments and reworkings. His selection of texts favoured Buddhism as a philosophy without any supernatural elements. While criticized by contemporary scholars, this interpretation proved popular in the West. It proved a popular success, with a number of reprintings. It also influenced the development of Buddhist modernism in East Asia, notably in a Japanese translation of the book by D. T. Suzuki.