The Tree of Wisdom

The Tree of Wisdom – Nagarjuna

The She-rab Dong-bu (Tree of Wisdom) is a metrical translation in Tibetan of a Sanscrit ethical work entitled Prajnya Danda, written by Nagarjuna who flourished in the fourth century of the Buddhist era (about 100 B.C.), The Tibetan version was probably made about the 11th century of our era but the exact date has not been determined. It is included in the Ten-gyur, beginning at leaf 165. 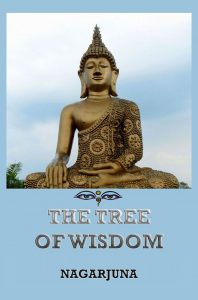 The Tree of Wisdom

The Tree of Wisdom.

About Nagarjuna (from wikipedia.com)

Nāgārjuna (c. 150 – c. 250 CE) is widely considered one of the most important Mahayana philosophers. Along with his disciple Āryadeva, he is considered to be the founder of the Madhyamaka school of Mahāyāna Buddhism. Nāgārjuna is also credited with developing the philosophy of the Prajñāpāramitā sūtras and, in some sources, with having revealed these scriptures in the world, having recovered them from the nāgas (water spirits often depicted in the form of serpent-like humans). Furthermore, he is traditionally supposed to have written several treatises on rasayana as well as serving a term as the head of Nālandā.