What I have done with birds

What I have done with birds – Gene Stratton-Porter

A fantastic work about the birds in the Limberlost swamp area in Indiana, USA. The book contains a wealth of character studies of native American birds as through friendly advances the author could induce to pose for her. Both text and pictures, of which there are almost forty in this edition, display an intimacy with the home life, the moods, the manners and customs of birds. 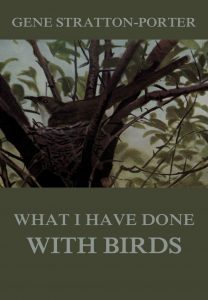 What I have done with birds

What I have done with birds.