Mr. G. K. Chesterton, as all the world knows by this time, had the courage of his convictions. He would also, if he had his way, have everyone else possess a similar courage. In his collection of ephemeral papers (he admits their ephemerality) entitled “All Things Considered”, he more than once condemns journalistic anonymity as the shelter of uncourageous and unstraightforward writers. No one can ever charge him with any such skulking behind an anonym or a pseudonym or an editorial “we.” Whatever he has to say he says boldly and unmistakably in the first person singular, and signs his name to it. 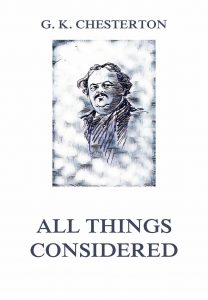