On the Nature of the Gods

On the Nature of the Gods – Cicero

Cicero’s letters to and from various public and private figures are considered some of the most reliable sources of information for the people and events surrounding the fall of the Roman Republic. This is volume four out of four with Cicero’s letters from the years B.C. 44 (continued) and B.C. 43. 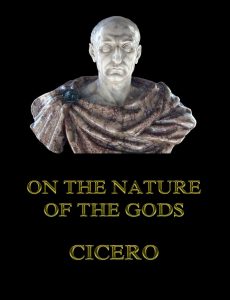 On the Nature of the Gods

On the Nature of the Gods.

More information on ‘On the Nature of the Gods’ (from Wikipedia):

The dialogue is on the whole narrated by Cicero himself, though he does not play an active part in the discussion. Gaius Velleius represents the Epicurean school, Quintus Lucilius Balbus argues for the Stoics, and Gaius Cotta speaks for Cicero’s own Academic skepticism. The first book of the dialogue contains Cicero’s introduction, Velleius’ case for the Epicurean theology and Cotta’s criticism of Epicureanism. Book II focuses on Balbus’ explanation and defense of Stoic theology. Book III lays out Cotta’s criticism of Balbus’ claims. Cicero’s conclusions are ambivalent and muted, “a strategy of civilized openness”; he does, however, conclude that Balbus’ claims, in his mind, more nearly approximate the truth (3.95).

This work, although not written by an orthodox Epicurean or Stoic, is important because it supplements the scant primary texts that remain from Epicureans and Stoics discussing their views on religion and theology. In particular, heated scholarly debate has focused on this text’s discussion at 1.43-44 of how the Epicurean gods may be said to “exist”; David Sedley, for example, holds that Epicureans, as represented in this text and elsewhere, think that “gods are our own graphic idealization of the life to which we aspire”, whereas David Konstan maintains that “the Epicurean gods are real, in the sense that they exist as atomic compounds and possess the properties that pertain to the concept, or prolēpsis, that people have of them.”

This work, alongside De Officiis and De Divinatione, was highly influential on the philosophes of the 18th century; Voltaire called it “perhaps the best book of all antiquity”.