This volume contains his most important polemic against heretics, the “Philosophumena”, the original title of which is ‘A Refutation of All Heresies’. The first book had long been known; books IV to X, which had been discovered a short time previously, were published in 1851. But the first chapters of the fourth and the whole of the second and third books are still missing. The first four books treat of the Hellenic philosophers; books V to IX are taken up with the exposition and refutation of Christian heresies, and the last book contains a recapitulation. The work is one of the most important sources for the history of the heresies which disturbed the early Church. In addition this edition offers many fragments and an extensive appendix. 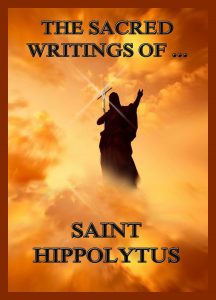 The writings of Saint Hippolytus (from wikipedia)

Hippolytus’ principal work is the Refutation of all Heresies. Of its ten books, Book I was the most important. It was long known and was printed (with the title Philosophumena) among the works of Origen. Books II and III are lost, and Books IV–X were found, without the name of the author, in a monastery of Mount Athos in 1842. E. Miller published them in 1851 under the title Philosophumena, attributing them to Origen of Alexandria. They have since been attributed to Hippolytus.

In 1551 a marble statue of a seated figure (originally female, perhaps personifying one of the sciences) was purportedly found in the cemetery of the Via Tiburtina and was heavily restored. On the sides of the seat was carved a paschal cycle, and on the back the titles of numerous writings by Hippolytus. Many other works are listed by Eusebius of Caesarea and Jerome.

Hippolytus’ voluminous writings, which for variety of subject can be compared with those of Origen of Alexandria, embrace the spheres of exegesis, homiletics, apologetics and polemic, chronography, and ecclesiastical law.

Hippolytus recorded the first liturgical reference to the Virgin Mary, as part of the ordination rite of a bishop.

The commentary on the Song of Songs survives in two Georgian manuscripts, a Greek epitome, a Paleo-Slavonic florilegium, and fragments in Armenian and Syriac as well as in many patristic quotations, especially in Ambrose of Milan’s Exposition on Psalm 118 (119). It is generally regarded as an instruction relating to a post-Baptismal rite of anointing with oil as a symbol of receiving the Holy Spirit. The commentary was originally written as part of a mystagogy, an instruction for new Christians. Scholars have usually assumed the Commentary On the Song of Songs was originally composed for use during Passover, a season favored in the West for Baptism. Hippolytus supplied his commentary with a fully developed introduction known as the schema isagogicum, indicating his knowledge of the rhetorical conventions for teachers discussing classical works. He employs a common rhetorical trope, ekphrasis, using images on the walls or floors of Greco-Roman homes, and in the catacombs as paintings or mosaics. Origen felt that the Song should be reserved for the spiritually mature and that studying it might be harmful for the novice.

About 215, he wrote the Apostolic Tradition, which contains the earlier known ritual of ordination. The influence of Hippolytus was felt chiefly through his works on chronography and ecclesiastical law. His chronicle of the world, a compilation embracing the whole period from the creation of the world up to the year 234, formed a basis for many chronographical works both in the East and West.

In the great compilations of ecclesiastical law that arose in the East since the 3rd century, the Church Orders many canons were attributed to Hippolytus, for example in the Canons of Hippolytus or the Constitutions through Hippolytus. How much of this material is genuinely his, how much of it worked over, and how much of it wrongly attributed to him, can no longer be determined beyond dispute, however a great deal was incorporated into the Fetha Negest, which once served as the constitutional basis of law in Ethiopia — where he is still remembered as Abulides. During the early 20th century the work known as The Egyptian Church Order was identified as the Apostolic Tradition and attributed to Hippolytus; nowaday this attribution is hotly contested.

Differences in style and theology lead some scholars to conclude that some of the works attributed to Hippolytus actually derive from a second author. Two small but potentially important works, On the Twelve Apostles of Christ and On the Seventy Apostles of Christ, are often neglected because the manuscripts were lost during most of the church age and then found in Greece in the 19th century. As most scholars consider them to not have been written by him, they are often ascribed to “Pseudo-Hippolytus”. The two are included in an appendix to the works of Hippolytus in the voluminous collection of Early Church Fathers. The work on the 70 apostles is noteworthy as a (potentially) early source.