Treatise on the Commonwealth

Treatise on the Commonwealth – Cicero

Cicero’s comprehensive treatise on the Commonwealth known as De Republica is a work whose direct and practical purpose was to arouse Roman citizens to the dangers which then threatened destruction to the liberties of their country. In appealing to his countrymen “to rise on stepping-stones of their dead selves to higher things,” the inspired patriot did not hesitate to promise that all patriotic and philanthropic statesmen should not only be rewarded on earth by the approval of their own consciences and the applause of all good citizens, but by immortal glory in a realm beyond the grave. 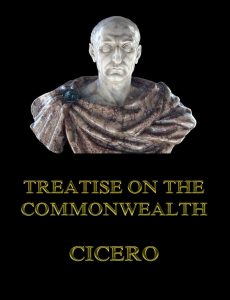 Treatise on the Commonwealth

Treatise on the Commonwealth.