Treatise on the Laws

Treatise on the Laws – Cicero

As a companion work to the Republic, Cicero wrote the ‘Treatise on the Laws’, De Legibus, which was almost certainly not published in Cicero’s lifetime, and possibly had not received the last touches when he died. There are three books extant, with gaps in them; but a fifth book is quoted. While the Republic describes the ideal state, the Laws discusses its statutes, so that the later work sometimes repeats the thought of the former. Thus the first book of the Laws lays as a foundation for the whole treatment of laws the thesis that all law is derived from God, through our inborn sense of justice; and this is also the subject of the third book of the Republic. The second and third books of the Laws are concerned with religion and with magistracies; two topics that in some form or other were touched upon in the latter half of the ‘De Republica.’ 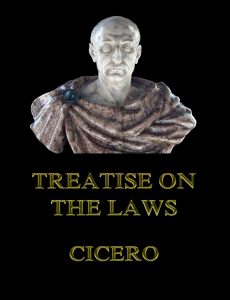 Treatise on the Laws

Treatise on the Laws.